Writing is glamorous. Right? Especially if you write fiction. You get to create characters – whole people, whole groups of people, whose identities and actions come to life simply because you decided they should. You can create an amazing swashbuckling undead pirate zombie who has risen from the dead to save the only thing he ever loved: his reputation. Or, you can fathom a distressed orphan found and raised by a group of lonely housewives, unbeknownst to their husbands and families, who grows up to be a serial killer, because, really, who needs that many mothers?

It’s great to have that kind of control.

Self-publishing is somewhat less glamorous. You retain control over most aspects of your book’s creation, from having input on the cover design to the channels you’ll use to market and sell it, to setting the price and even running sales. But now that you’ve written the book, you need to think about it, and analyze it, and make it interesting to people who are willing to pay you money for it. Which, really, is still kind of awesome.

But, now, excel spreadsheets are involved. 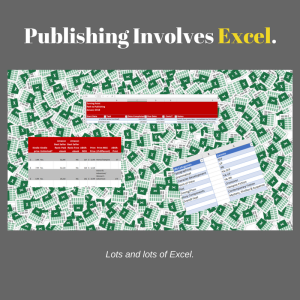 I love excel, don’t get me wrong. I mean, I’ll gladly put information into little cells and play with it for hours, but it just doesn’t have that same sense of awe and wonder that comes with the actual writing of a story.

And, that’s where I’m at this week. Making spreadsheets and analyzing data.

5 thoughts on “Adventures in Administration”